Ethernet 802.1q VLAN’s have many useful functions and are especially valuable in managing networks with VoIP traffic.

Many VLAN’s can exist on a single media (such as a Twisted Pair Category X cable or a fiber optic interface. 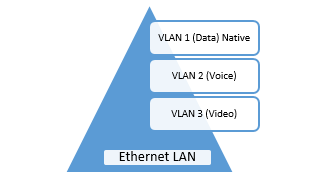 VLAN is available on Sangoma IP Phones.  We support three ways to get VLAN ID for Internet (WAN) port, but the VLAN used is chosen by priority of each method. The priority is: LLDP>Manual>DHCP VLAN. The phones only support Manual method to get VLAN ID for PC port.

Sangoma IP telephones contain two interfaces labeled LAN and PC.  Essentially they contain a three port switch.  Port 1 is connected to the LAN, Port 2 to the phone internally and Port 3 to the PC.  With the flexible interface each port can be configured on a separate VLAN.

The most common configuration is noted above,  the DATA VLAN is configured as native so any computer being plugged into the network will be on that VLAN.  Voice is on VLAN 2.  In this configuration both the LAN port is tagged and the PC port is untagged.  The voice VLAN is 2